Monsters, scratch our fluff crew, and they turn spiky, repression is a universal human problem to be mediated. The subject of the fluffy/spiky debate – respect for diversity and the desire for debate based on this respect is a core outcome. We need to build bridges. 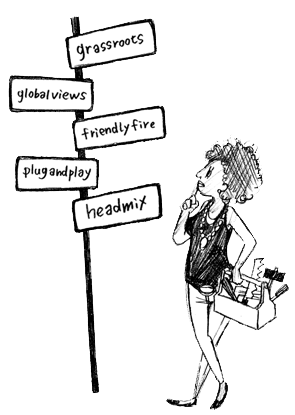 If you suffer from stress in this context, please feel free to say more about what you see as causing that stress?

That is clearly passive-aggressive.

I feel great discomfort when I read your characterisation of something as “fluff” and “yogababble”.

You feeling discomfort… did you read the links and think about what I was expressing or did you stop at the “discomfort”?

” A. I find it interesting, and revealing, that nobody here actually talked about what the thried was about Online governance – openwebgovernancebody – Gitea: Open Media Network ”

Other tools may be more appropriate for other organisations.

Good place to start from.

In the 1990’s anti-road moment that grew into the early 2000’s anti-capitalist/antiglobalisation movements. This time solved meany issues in activism/grassroots outcomes. One of these was a way of mediating the blocking of communication we have here. They called it the “fluffy/spiky debate”, note you will only find mentions of this as we are crap at keeping our own history, lets not start a conversation on “our” academics and the crap they feed

The most important part is the “debate” which leads to a VERY HARD idea “diversity of tactics” on the ground and online. The quote above is a small step to this.

Both have value, BUT one has more value for existing society than the other as it’s deigned to work in a mess. The other is fine for “calming” situations for small “inward” looking groups

In the era of #climatechaos and the #mainstreaming swing to the right-wing we need to build and maintain bridges that keep respect for the “fluffy/spiky debate” in place.

And most importantly these process need to work in mess.

What do you think?

Remember I have met some of these people. What do you think I should do with these guys, they hid posts 6 times, they permanently removed one post,

They pushed Ad hominem – Wikipedia attacks in meany replys, not just ones.

FINALLY, one of them likely reads some links and posts something that has relevance to what am talking about, and I reply to this very late first step and SILENCE.

Don’t blame them, this is kinda normal, but this takes the fluffy outa fluffy and shows the spiky that is always a part of activism.

As I say this is normal for this group of people

What to do with them?