Q. “We’re supposed to think of #metadata as less than #data, but it isn’t: often it is more. . .#govts that want to control their people & crush #dissent want #metadata.” #privacy #Whatsapp #BigTech

This is an interesting point, but it only makes sense if you see people as isolated individuals and the being no such thing as society. No alternative to the capitalistic free markets and no hope of changing the death spiral we are on – you might be right. BUT this is a deeply reactionary #deathcult point of view and need to be called out as such – LOUDLY.

For the last 10 years we have had a movement to banish metadata on one side and to hoard it on the other. To banish our humanity or to control our humanity. Nowhere is the celebration of humanity to be found… it’s pastime to put our feet back onto the ground and think about this for a moment. Metadata, data about data is what gives humanity its power in both an individualist sense and at a social scale.

One thing we know for sure is that ideas about privacy change, in the feudal era the village priest know everything and policed everyone, the king had sex in front of the counters to prove his line etc. The current capitalist idea of privacy which we all internalise is set to change, what it becomes we do not know.

What is the free-market? it’s a signalling device based on knowledge of metadata. For people who know little about the “free-market” is a flow of horde metadata as is “money”. In meany ways you are made up of metadata, the words that come out of your mouth are the made up names of things, likely the “things” are made up from words handed down through the ages. When you look at it all HUMAN civilization is a flow of metadata.

If we are to have meaningful social change – let’s look at anarchism as an example. How will we replace the “free-market” where will the signals come from to distribute the goods in complex society? And yes we might end up with “simple society” by killing billions of people from #climatechaos that’s true, but that’s a different subject.

Q. Metadata is the currency of surveillance capitalism. Traded as behavioural futures, and used by the military to perform situational spectroscopy upon whole nations. We can try to minimize metadata, but it’s always a tricky problem. When we generate metadata we hand cash to the likes of Google, who call it “behavioural surplus”. And to shadier organisations to use it for disruption and control. In the past there were entire academic conferences about using social media metadata to prevent “contagion” – by which they meant social movements opposing autocratic governments.

Am not in any way disagreeing with the above, I am pointing out that it is actually not the agender you think it is… raising the question of which side are you on. If nothing changes then you are right, but if nothing changes we end up with billions of people dyeing from #climatechaos and the state control/fascism that comes with this. As I outline this is a #geekproblem world view that of only thinking of tech and not social – hope I can help to balance this. 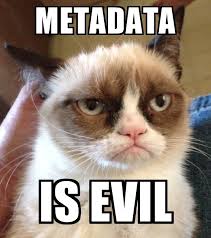 We HAVE TO CHANGE we can’t keep doing this same old shit. Privatizing metadata for a tiny number of geeks is not a social change project. Cant put this any simpler.

Q. This goes back over a decade to the “Freedom in the cloud” talk. What if internet users were to run their own services, and keep the logs (metadata) ? Simply moving the logs from Goog and Zuck to the users would be one of the biggest improvements to the internet. It would pull the rug out from under their business model.

That’s the plan with the #OMN and we go further (but only if the users/producers flick the switches) we have an expanding metadata commons that has two powers – one negative in that it destroys the business model of late capitalism one positive that it expands commons that gives us growing space for creativity and expression.

Summing up the choice we face:

* Capitalism wants to privatise metadata to the capitalists #dotcons and the capitalist then control the government – fascism is back into fashion.

* Chinese communism, wants the state to control the metadata so they can control capitalism, we are back to the command economy on steroids.

* Liberalism want to privatise metadata to the individual to return to a mythic free-market past.

* What does anarchism want #4opens #OMN is an attempt to answer this last one.

To recap I understand our current push for privacy from the #dotcons BUT am asking what are we to replace this with? The closing/privatizing of metadata to individuals ” is a deeply reactionary #deathcult point of view and need to be called out as such – LOUDLY!”