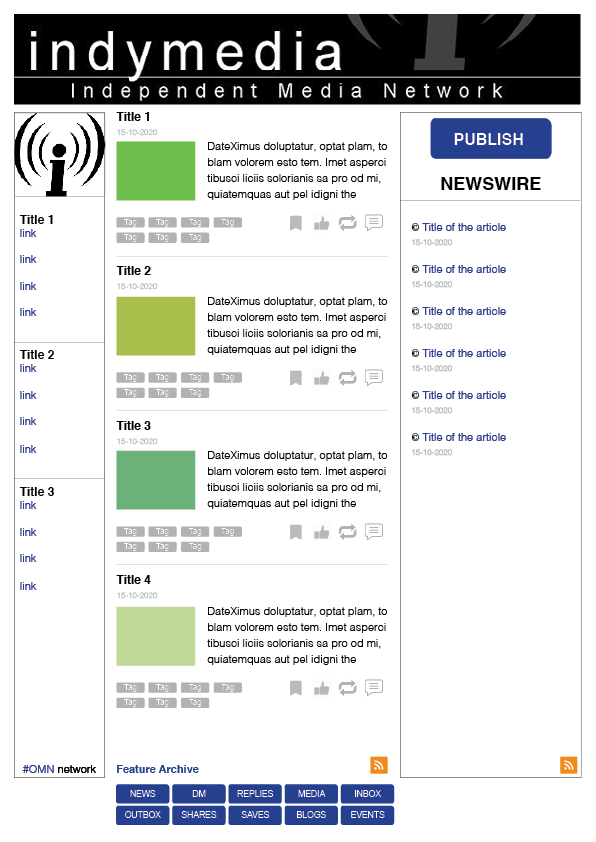 The “newswire” used to be open publishing we now add a switch trust/moderate to this wire. The UK indymedia site did something similar latter in its life. Its up to the “editorial collective” to flip this switch for site/accounts/tags etc

The central “fetures column” is newswire articals promoted to a feature. These are written by the “editorial collective” from text and media resources from newswire posts.

Both are news flows.

In journalistic terms the newswire is “breaking news” that flows past fast. It might or might not be true/accreat in real time but will be relatively accreat over time. Its “citizen journalism” in that horrible liberal term. Grassroots reporting maybe better term.

The “feature column” is more like tredtional journalism. Facts are checked, spelling correct, sound in audio good, videos stable etc its the best of the newswire collected and put into context by a group of “citizen journalists” this moves slowly so articals stick around for days/weeks.

The moderation stream is not visible to non “editorial collective” people.

The value in the OMN idea is a social feedback loop to push federation to a lowest level, grassroots. The 5 functions: link/trust/moderate switch is key to this social outcome.

The OMN use of these 5 functions as a strong political/social protection against political infighting/tribalism and mediating the #geekproblem by removeing the levers of control from the programmers/admins and giving them to the producers.

From my long experience in the delight and mess of grassroots media/tech, with out the last two “social tech” paragraphs the project has zero chance of working.