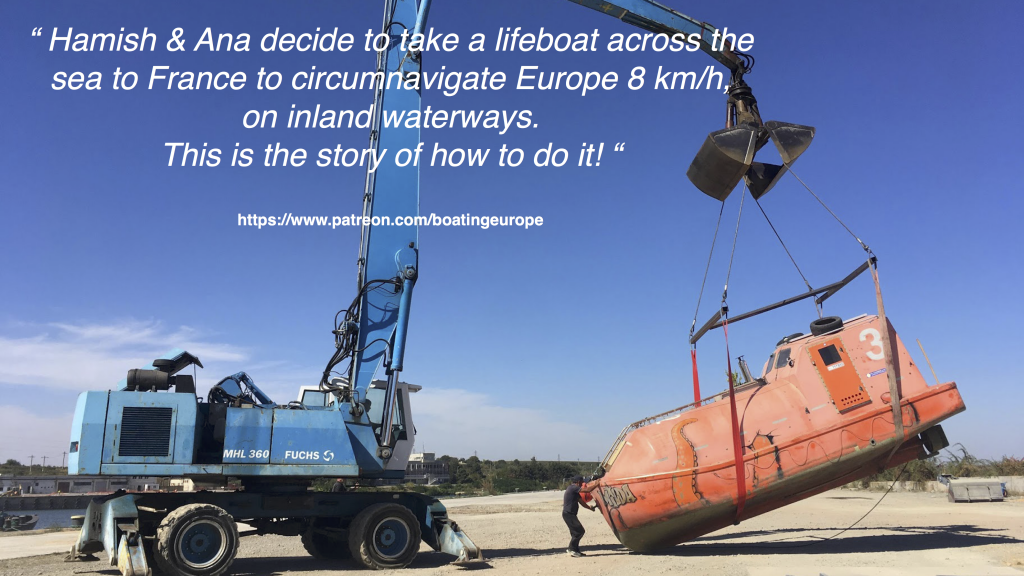 “my name is Hamish have been a media activist for 20 years, i recently was paid a wodge of cash from an Italian feature film. I had been in London for 5 years runing media workshops, i decided it was time to sail away. I had found out about converting lifeboat on the internet. Wile out for a Coffey i discovered a big orange lifeboat covered in concrete blocks”

“I found the source of the London lifeboat and gave a call, a wee man in Aberdeen. dealys lead to a visit to geece”

“At the end of the gathering i get a email that my boat would be arriving in a few days” music montage to the sea.”

* Trip to Scotland – best railway line in world/camping on island/ my interview about why boat.

“open with train, call the guy boat is not going to be in a for a few weeks” order later.

* Second trip to Scotland selecting/working on boat – boat speck, what is a enclosed lifeboat.

delay –  the truck was supposed to be a week delay. in the mean time instead of starring out the window, spikes and fluffs working together I decide to goto balcome to do some media training.

* Balcombe – the truck is delayed/ climate change and solar skills

” talking head fuck what do we do know,

* Boat in water driving to London (montage) with section on low bridges and cyclists. (check cyclist)

Find out about the film here https://www.patreon.com/boatingeurope