I was at college in the years that the old grant system was faded out to be replace by student loans.

After I finished the course in 1999 each year you had to fill in a deferment form which needed accounts doing if you were self employed, a letter from the firm accountant if employed, or stamping by the jobcenter if unemployed. This was bureaucratic necessity… but for me this was made more complex by the fact that my loan fell between two different loan companies. If one was deferred then the other was also deferred for the year, but the two companies did not talk to each other for some reason in my case and this was not resolved for more than 15 years.

The Honours student loan company and Erudio Student Loans are the two companies. Every year I have had the same problems with these companies and each year it has been resolved by me takeing the time to force them to talk to each other. That is 15 years of hassle; sometimes by phone calls for weeks at a time. After the same hassle yearly I made an agreement with them that they would talk to each other and synchronise the loan accounts so that the same thing would not happen the next year.

This would allow me to fill in a single form once a year. And each year they failed to make this change they had agreed to do the year before. Each year I would have the same conversations and threats from them and after a lot of hassle the two companies would finally talk to each other and the problem would go away for another year. This went on for 15 years, and each year they failed act to solve the problem after agreeing to do just that.

The loans were up for being cancelled by this time, but in the final year they refused to talk to each other thus, in this final year, they actually went further, the loans had become so much out of sync that the deferment on the Erudio loan was still on going for 3 months – so I was still deferred but they refused to tell Honour student loans of this so I had Honour chasing me for deferment when I was already deferred. I told them to go away and sort this out as the responsibility was theirs for repeatedly not doing what they had agreed to do – synchronising the loan dates.

My response was reasonable – that they had failed to do what they had agreed to do thus it was their responsibility to sort this out. After 5-10 phone calls I put this in writing, they replied with this letter ignoring the point I made: 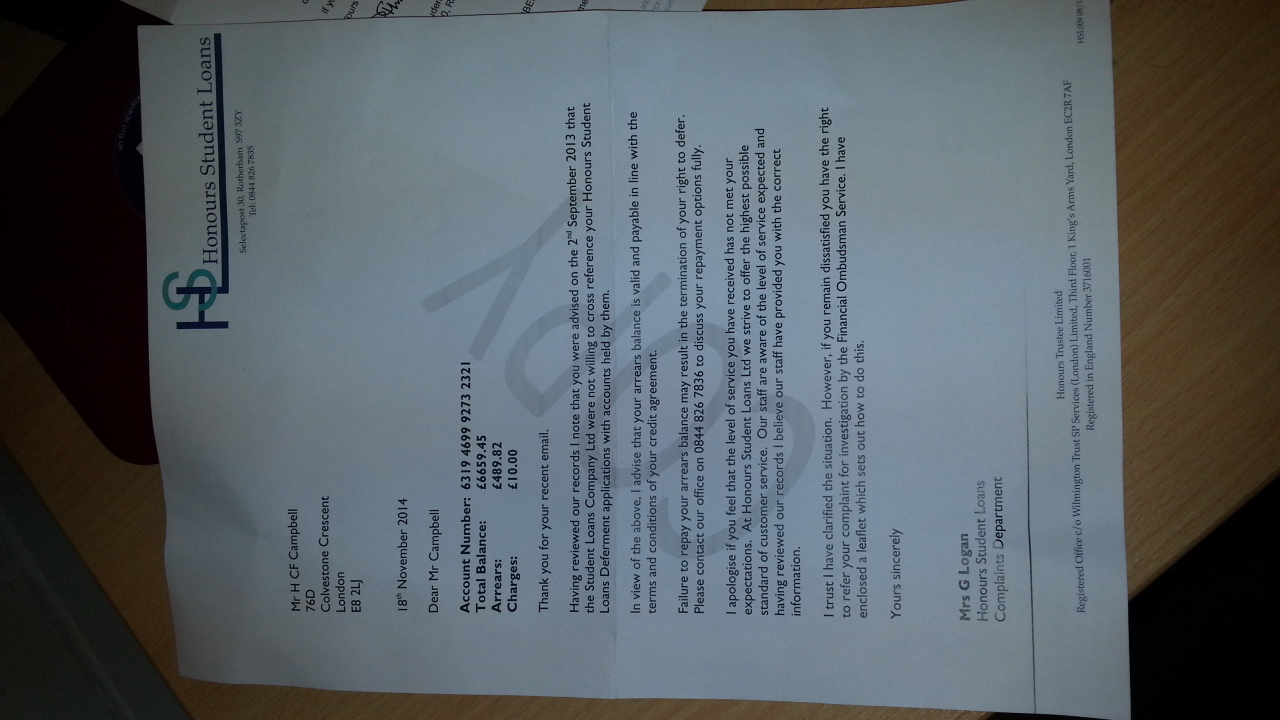 But interestingly the accounts had finally been synchronised after 15 years 🙂 Thank you for resolveing 15 years of broken agreements and hassle.

And there is still the sum outstanding of fines (charges) and interest while they were failing to do this simple thing. This 6 month backlog and is covered by the 3 months my loan actually was  deferred (by a correctly filled form by the other company) and the is 3 month back dating so I actually don’t owe them anything even taking into account their behaver.

I would like a full apology from the company for their failures and 15 year delay, and at this stage compensation to cover my time and energy. 15 years of 10-15 phone calls and 5-6 letters each year. At a rate of £200 (my day rate), that would be say 2 full days a year for 15 years – that is £3000 in compensation for my time wasted.

Thank you for your time.

Ps. and the fine written off obviously. 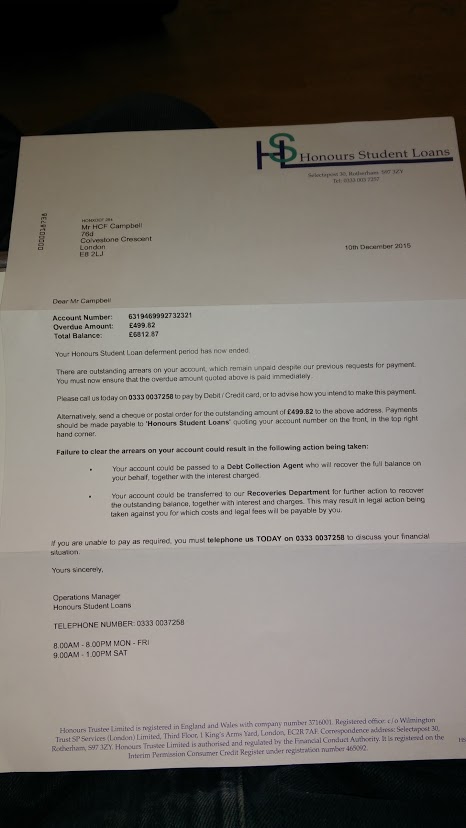