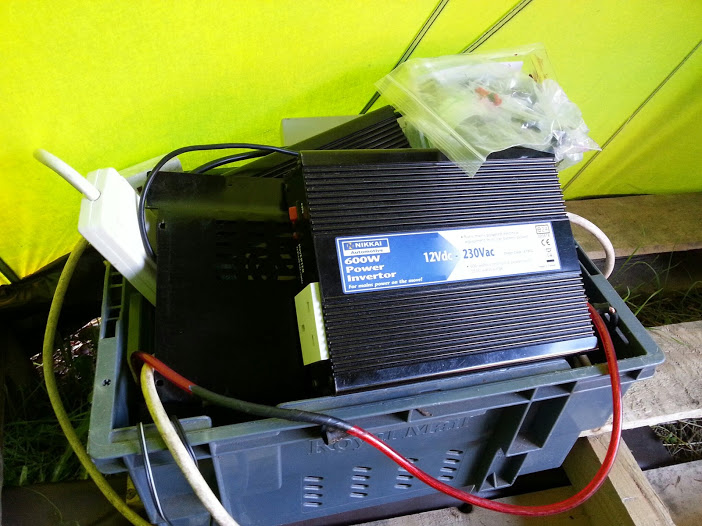 We have come a long way in the tech tent in helping to change the mindset of the camp to be more environmental. The camp is moving more slowly towards being in tune with the wider natural rhythms of the seasons. Our next challenge in this is to get the camp to recognise that there are seasons and that autumn is coming. As a natural shift, power generation will start to move from sun to wind and other more experimental energy generating.

What have we achieved:

We moved peoples’ perception on to be aware that where power comes from affects when you have it. The current power is solar and it comes from the sun so any power we have is available when the sun is brightest and strongest – so we have power between 11-4 o’clock to use laptops and charge phones. Before and after this only core and emergency use is available.

We managed the transition from inefficient inverters powering 240v AC hungry household appliances to native 12v DV low powered equipment. This is a basic green issue of energy use: use less and use it better. The inverting is costing more then 40% of the power coming in when you take into account battery efficiency.

WHY? It’s about the efficiency of the battery/wire/voltage converter technology. Storing the power then retrieving it has a cost. We decide not to pay this cost. We use the power as much as possible directly from the sun. The batteries are used as floats, they buffer/moderate the power. If you use the batteries as floats and buffers you can use this power with little loss. As soon as you shift use of the power to other times you have the energy cost of charging, storing and retrieving the power – this can be as much as 40% of the total coming in. When you add to this the inverting (DC-AC-DC) of power which we were doing at the start this makes no sense at all unless you are connected to a coal or nuclear power station. The reality was that the batteries in the camp were shipped out by car each day, charged on the grid then shipped back by car, drain and repeat.

We are still working on the respect and longevity of the environmentally damaging batteries that we use and are donated. 6 have been destroyed so far and most of the rest damaged/degraded. This is a ecological cost in polluting with dangerous lead and acid. It’s a mission that we will have more time for after the basic set-up is in place.

We cleared the tech space of the mad rip-it-apart-every-night energy and replaced this with more clear and safe sorted people (well, as sorted as you get at protest camps). This led to semi-permanent working set-ups rather than the draining of energy of having to re-build everything from scratch each day. It’s interesting that it’s hard to move people beyond the black and white thinking of solving problems to the more holistic thinking of respect for diversity of strategies. This mad creative/destructive energy has a space in the camp – and we have to nurture a space for it, rather than try and use a lot of energy failing to exclude it.

We face the basic green issue of energy use, use less and use it better in the case of batteries. The core space is now working, the next challenge in power is diversity of sources. Can we move investment away from solar as the summer comes to an end and the daylight hours shorten and fade.

For any power you take out in the evening about twice as much power has to be put back in the morning, so it’s a bad way of borrowing shifting use times. It’s an education building a power station at a protest camp.