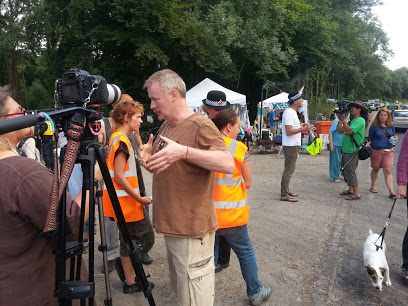 I have been at Balcombe camp for nearly 2 weeks working in the tech tent. The campaign is a positive experience and the issue is very winnable. But the internals of the campaign and the camp that is now at its centre is like many in the past dysfunctional anufe to help undermine this likely victory. The are a lot of hidden agenda’s amongst the #Balcombe anti-fracking which can make a very dysfunctional campaigning space. I am sitting this morning in such a situation.

If my solar equipment isn’t here (which at the moment it isuant, as I though the new 450w had arrived) the camp has one 27w solar panel which on a sunny day can power a small laptop or charge 4-5 phones. This has been going on for a month or more. For a time I brought extra panels and got us up to charging 20-50 phones a day including all the legal and core camp phones. Was a happy time that was crowned by a offer of local funding and a morning on the pub wifi, £600 ordered 450w of solar panels and controllers. See post (LINK)

It was going to take 3-4 days for the gear to arrive so I left the camp with a working basic solar phone charging set-up for core camp phone’s for a few days to do some work in London. Keeping an eye on social media I noted that the process of installing the solar panels had got stuck somehow so decided to come back to the camp to finish the install.

Arriving back to a poisonous soup of clashing agenda’s the panels were stuck in a locals house and are still there now 4 days latter.

The is a sorted tech crew, but no consensus on how to move on from here. So days are spent rasherioning power and argueing over fantasy plans which are beyond the power we have and beyond the 450w of power we will have at some point.

Its interesting to experience the internal dynamics inside the tech team –

On one hand we have pragmatic realists – who recognise the lack of control, creative and destructive power at camps. They deal with this by:

Of course the is nothing to stop the different working groups co-operating and helping each other, what this avoids is the competition and ego-flaring that envehrtably happens in the highly stressed camp life.

On the other hand we have obdurate realists who while right in what they are saying are ignoring the circumstances of where they saying it. I can give you an example: in the last 24 hours the solar phone charging I set-up has been ripped apart and scattered, then re-built 3 times. To keep this working today I sat in the tent all day this is not a sustaining way of running a key camp technology.

This is the reality of camp life with no working consensus. 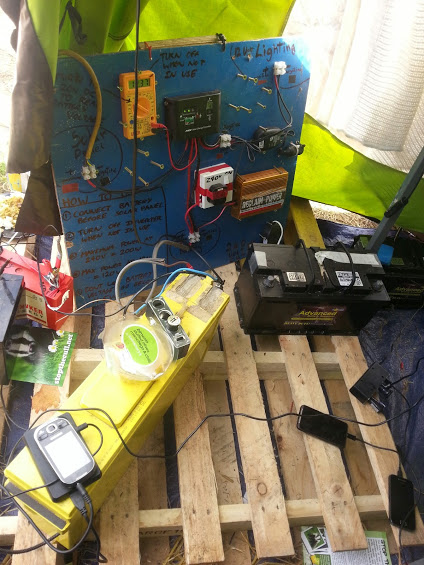