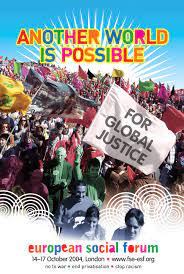 DRAFT – this is a e-mail dialogue that illustrates the issues of horizontal and vertical process and how they fail to balance.

Firstly the has been a lot of talk of me as some kind of egotistical anarchist… this is far from the truth, and by long experiences if anyone asks I call my self a socialist in anarchist circals. Maybe its time that we have a go-round of the e-mail list and introduce ourselves..

So a bit about me:

* was key to setting up the video side of the media centre in Genoa – 73 Italian riot police are facing prosecution and jail through my video work at the Diaz school raid have already testified to the prosecutors and have to go back for the court case in a few months. My video has helped to keep quite a few people out of jail.

* work full-time at undercurrents probably the most successfully alternative media organisation, prior to the IMC. Our work reached out to millions of people and helped to shape the globalisation movement that created the WSF. We tell stories that you don’t see on TV. You can watch one of our films here: http://showcase.commedia.org.uk/article/articleview/331/1/23/

* recently have been have been involved in the creation of Oxford IMC and the idea of local news. www.oxford.indymedia.org.uk

I see the ESF as a place to showcase alternatives by film and debate.

The horizontal globalisation movement has been going for a long time and its good that it now encompasses the SWP/GR who joined rather more recently ( and then some how, ludicrously, claimed to have invented it!) I in no way want to exclude the old left and would welcome the SWP/GR and GLA into the process – however they have to engage in the process and respect its diversity, rather than dominate and obscure it.

UPDATE: later in the process

To try and clear up some of the purposeful misunderstandings:

I feel it is very important for the SWP/GR to be involved in the ESF process, though there very childish behaver – all this constant talk of the need to be grown up and serious makes them had to take seriously. They do have knowledge of creating (though they have a terminal problem of sustaining) large structures. They do know the language of trade unions and bureaucratic hierarchy and the will be many of them to deal with.

The problem lies in that:

* they are dominating, disrupting, dictatorial, and damming of any hope of open/democratic process which is key to the new politics that is at the core of the ESF.

* the working group structure started out very well – but it cant be controlled by them thus cannot be allowed to continue… dose anyone get any idea of insecurity here… how can we bring the power back to the working groups which are working well.

* we as the ESF need to sanction them and then get on with the practicality of the London ESF gathering.

Can the ESF, that’s all of us, get back on a level with our collective hope and dreams… the SWP/GR are universally hated by a large majority of the alternative globalisation movement if they are seen to be at the centre of the ESF it WILL BE SERUASLY WEAKEND. Can they not be quite so blatant in there manipulations… and let some other voices into the monotony that is the current “dialogue”.

I for one wont the SWP/GR and the mare of London involved in the ESF process if another world is possible we have to start with the one that is here and now and that dose include them.

UPDATE: the end of the process

What should we do at the European meeting on the 6-7th? The 2004 UK European Social Forum will probably go ahead in a bastardised stunted form unless some fresh air and creative energy can be brought into the process. The current “Organising Committee” was concocted in secret, forced through a meeting by acclamation and is clearly/practically designed to exclude thoughts who aren’t mates of the GLA and SWP/Globalise Resistance. This small minority have by there dogmatic/manipulative view of alt-politics made the 2004 UK ESF process in to a farce.

It’s hard to know what can be done at the European ESF meeting, as these people have long experiences of packing meetings, manipulating chairs, imposing agendas and telling lies through nit-picking truth. With no dialogue between the different groups this meeting cannot achieve anything.

* Can the organising process be opened or is this a lost minority course? Perhaps the positive way forward here is to get good facilitation for the European meeting. Is it at all possible to make this happen?

* The question must be asked and answered – are the these lying/cheating/stealing comrades even part of the movement which we are all loosely part of?

Is the ESF process a space for people who – lie, cheat and steal?

* Lieing – they keep calling for openness were everything they create is closed.

* Cheating – the chars they continually install have no mandate for consensus all key decisions are decided before the meetings begin.

* Steeling they couldn’t get a consensus on there “organising committee” structure, and refused to listen to the many alternatives, so imposed one by packing a meeting and passing their motion by “acclamation” when it is explicitly stated in the WSF principals that decisions CAN NOT BE MADE BY ACLAMATION for this very reason of groups stealing the process.

This small anti-democratic clique have pushed through there agenda ending the stale mate they created in the first place so as to close the process down to them and there mates. It will now be very difficult to work with them to open up the ESF process as if they do they risk loosing all credibility. Realise this and having long experiences of lieing/cheating/stealing they have castrated the ESF to keep their domination as they cannot quietly dominate it. I feel that if the process can be opened in even small ways they themselves and there authoritarian tactics will be gradually sidelined… they will be, in true ESF spirit, one voice amongst many.

“What is to be done”