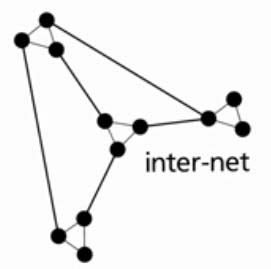 In the 1970s the military looked at a problem – how to keep communication working in an anarchic environment (a nuclear war). Their solution was to work with this environment not work against it. They built an anarchic network – the internet. This network was small and insignificant compared to the traditional centralised networks that existed and continued to grow. Limited Background

In the late 1980s an individual at the anarchicly-organised CERN borrowed an idea that would make it easer to navigate, HTML, the based of the World Wide Web. Few took any notice. Limited Background

In the 1990s people started to build unexpected things with this open network and open standards and surprisingly these things grew and grew… In the end they pushed all the centralised dominate networks to one side where they shrank until they largely disappeared. Thus the single internet as we know it today was born. It was an unplanned birth coming from the DNA of anarchists thinking.

By 2000 the dotcom boom expanded the internet to every corner of the world. It was driven by a very different world view – much like the world view that had built the very networks that the internet had pushed aside so easily. It was an attempt to enclose the new commons, to partition it into walled gardens with gates and ticket desks. But the network that had been set-up to flourish in anarchy and togather with the overlay of open standards of WWW resisted and in the end simply pushed this dotcom boom into a dotcom bust. Limited Background

The internet expanded again, filling up more areas of our lives, and encroaching on our economic system. The network which was created for anarchy and the open standards that embedded anarchy started to touch everything. Our society is based on ever-expanding markets, and the internet was a HUGE market. Increasingly it was replacing existing markets with piracy, which wasn’t a market at all. The internet is a giant copying machine and the copies are practically free. Where markets are based on scarcity, the new digital world, grown from anarchy, was based on abundance. In a world of abundance there is little for the market to buy and sell. Very limited backround and background

Round three of this fight by the old society to grasp control of the new manifested in a much more subtle walling and gatekeeping structure: corporate social networking and the fight against piracy (copying). It was an invisible but relentless push to remove the “disease” of anarchy from the core of the web (and large parts of socierty) and to bring the old order back into control. Today both Twitter (2008) and Facebook (2009) can only survive if they continually grow, and increasingly control the information flows and users access. As they do this the walls and gates that are currently mostly invisible will come more into view. I think the interconnected open web that is the internet would shrug this off as before if this was the only threat it faced. But there’s another side to the attack, the fight against piracy, which is an (largly invisible) fight against the open standards and digital logic of the web. It is leading to new laws that reach into and rend asunder the anarchist internet (the one built to work in the anarchy of nuclear war). It will do this by changing the underlying open standards that the net is built on and by rolling back to the days of the pre-internet, the age of closed intra-nets. Then Gate-keeping will be built into the DNA of this network. And this change will snuff out the anarchy and replace it with bureaucracy. The unintentional (largly unseen) experiment in complete social change will fade and die.

What choice do we have? Now we have many, soon we will have few, and in the end we may have none.

if anyone can help find backup articals to link for this please add them to the comments, thanks.