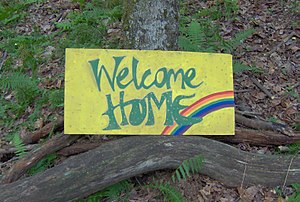 Rainbow gatherings have a very strong, largely invisible core of myths and traditions these are designed to overcome and transcend the “stupid individualism” of the Babylon world, and in as far as they are remembered and enacted they do this very well. The issue is that it is a virtuous circle, if the is the power there to start with then it is generally successful in transforming a bunch of strangers and misfits into a coherent whole. If the power is not there to start with them then incoherents tends to grow and dominate.