More than thirty climate activists and local residents took mass direct action to prevent excavation work on Britain's biggest ever open-cast coal mine at Ffos-y-fran in South Wales. Climate campaigners from all over Wales joined with local people from Merthyr Tydfil to evade police and security. They've pledged to prevent work on the site for as long as they can by climbing onto, and chaining themselves to the 1,300 horsepower yellow diggers. "Gordon Brown's officials this week jet off to Balifor UN talks on cutting carbon emissions but at home they're trying to drag us into a new coal age." "Coal is the filthiest fuel known to man and projects like this mine could destroy all our chances of tackling global warming. The battle over this hilltop in Wales is a fight for the stability of the global climate and it epitomises this government's hypocrisy on climate change." Check out our radical news site http://visionon.tv 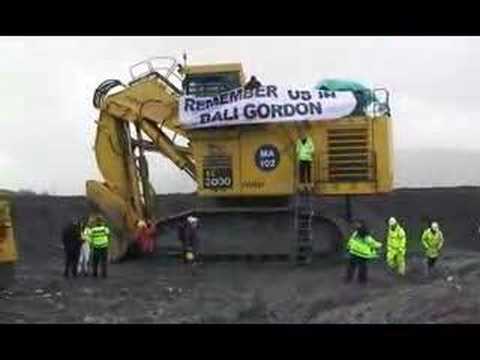